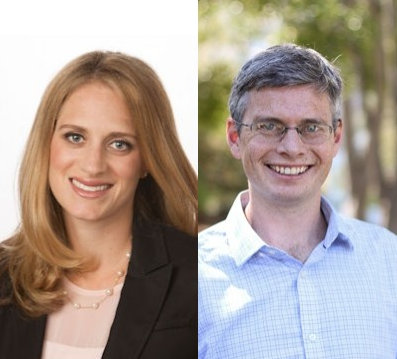 We are delighted to feature two alumni from our clinical psychology graduate program, Drs. Jessica Kaczorowski and Taylor Smith, who also happen to be a married couple. Jessica and Taylor met while they were graduate students in the program, got married in 2011, and are now the proud parents of 16-month-old Lyle.

Since Fall, 2014, Taylor has been an Assistant Professor in the Department of Psychology and Child Development at California Polytechnic State University San Luis Obispo (Cal Poly) and Jessica will join this same department in Fall, 2016. This high-achieving couple has also just opened a private practice, the PEAKS Clinic, which will specialize in child assessment.

Jessica earned her PhD in clinical psychology in 2012 under the direction of Dr. Tom Kwapil. During her time at UNCG, Jessica’s research program focused on understanding genetic, neuropsychological, and neurological risk factors in populations presumed vulnerable for schizophrenia. Her research is published in several prominent journals, such as Schizophrenia Research, Psychiatry Research, and Professional Psychology Research and Practice. She has also won several awards for her research. After obtaining her degree, Jessica completed internships in pediatric psychology (Kennedy Krieger Institute/Johns Hopkins University School of Medicine) and pediatric neuropsychology (Massachusetts General Hospital/Harvard Medical School). Her current research focuses on neuropsychological underpinnings of neurodevelopmental disorders emerging in childhood.

Taylor earned his PhD in Clinical Psychology in 2012, under the direction of Dr. Arthur Anastopoulos. His research focused on the genetic and environmental determinants of ADHD. Following completion of his degree, Taylor completed an internship in child/pediatric psychology at Temple University Hospital/Shriners Hospital for Children and he was also an NIMH T32 Postdoctoral Fellow in Child Mental Health at Alpert Medical School, Brown University and Division of Behavioral Genetics, Rhode Island Hospital. Taylor has continued to pursue research on ADHD, with the recent acceptance of four articles in a special issue of Behavior Genetics focused on “Genetically Informed Approaches to the Study of the Prenatal Environment.” His work has also been published in American Journal of Medical Genetics: Neuropsychiatric Genetics, and Journal of Attention Disorders.

The couple credits the UNCG graduate psychology program, and specifically their faculty advisors, for much of their success. Jessica notes that, “Tom Kwapil is a wonderful mentor. I was honored and blessed to work with him on a daily basis in graduate school, and am fortunate to still call him a mentor and colleague now. He balances holding high standards for his students with warmth and compassion. I credit so much of my professional success to working with him. He is, simply put, the best mentor someone can ask for.”

Taylor also considers himself very fortunate to have been (and still be) mentored by Arthur Anastopoulos in the ADHD Clinic, where he benefited from the integrated training in ADHD assessment, treatment, and research. He has many fond memories of the ADHD softball team – “The Slashers” – and from his time partnering with the Newcomers School.

The couple indicated that they “will always be thankful to UNCG for bringing us together!” We wish Jessica, Taylor, and Lyle all the best in the future.